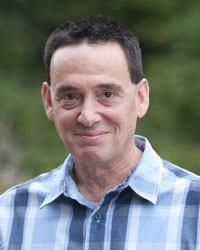 Before coming to Pitt-Bradford, Professor Guterman was a television producer/director in the Pacific Northwest. He enjoys listening to live music and traveling to New York City (the media capital of the world) in his spare time, where he regularly participates in media workshops.

Professor Guterman has won numerous awards from the Broadcast Education Association for both academic papers and videos. He is also past chair of the BEA's Courses, Curricula and Administration Division, and past president of Communication Administrators of Pennsylvania (CAP).